Year 2050, the world changed in the blink of an eye. Civilization crumbles, economy collapsed, chaos ensued, the law of nature was rewritten, and humanity was abrubtly fell from the top of the food chain. A new entity emerges, a superbeing which consumes living being and inanimate object alike, a raging god who know no remorse, a beast which later known as Aragami.
It was October 11th, it was midnight. New York city was suddenly shaken by an earthquake. Unlike any natural disaster humans has ever seen, this earthquake is nowhere natural as some kind of spire protruded from the earth below. Countless spires rises, destroying everything that stands on their path, crushing cars and roads, piercing buildings, and cut through the clouds.

Citizens of New York was awoken from their deep slumber by this rude awakening. One of the spires cut through the building where I live while I was looking from the window, grazing part of my room, a mere graze yet it was enough to wreck half of my chamber and hurl my body across the room and hit the door.

A sense of pain sting my shoulder. I tried to stand up and run away through the door, running from the spires that keep growing.

Seems like I’m not the only one who has the idea of running down and away from the building. The resident of 8th floor flooded the hallway with their eyes filled fear. Knowing that elevator doesn’t work, the resident run into the stairs. On the 7th floor, a second spire pierces the building, separating the group into two, crushing several unlucky people which happen to stand in the way of the spire. I’m lucky enough to not get crushed, but unlucky enough to be in the group behind the spire which has the way to coming down blocked, by the spire and dead bodies.

Seeing bloods and human flesh splattering around, people start to panic. People behind me scream and tried to running back, yet they were blocked by new wave of people who came from the upper floor. I frantically pushed the dead bodies to find a gap to pass the spire.

My hands wet with blood, yet i saw a gap, big enough but another dead body was blocking the way. Seeing as the only way out, i throw myself into the gap and pushing the dead body away. I managed to get to the other side, empty, only leaving a single dead middle aged woman. The others already got away.

The second spire keep growing, i see another person, male, probably as same age as I am, tried to pass the gap. I reach his hand and pull him to this side. From the other side i saw another two people forcing themselves to fit in the gap while the people from the behind pushing them.

It was a such bad idea , the growing spires makes the gap smaller and smaller. Ultimately they can’t neither get through or went back. A hopelesness and regretful cries, followed by groan of pain, and scream. Both were crushed inside the gap as I turned around, clenching my teeth in cringe, and run downstairs.

Seems like fate has it’s own way to keep surprising us. On the 3rd floor, a sudden blackout makes me lost track and slipped. In the darkness, i heard a series of bumping sound and scream of another person, seems like the one i saved before got same fate as me. I feel sensation of pain several times as my head, back, hand, shoulder, and feet hit the step over and over before i finally landed the floor, the 2nd floor.

As I writhing in pain, i tried to stand up and called my friend.

Yet, there’s no reply.

In the darkness I tried to find him. He didn’t land too far and I able to find him easily as my feet hit his. I kicked his feet to wake him up, yet there’s no reaction. Must be unconcious or so, that’s what i think. So i reached his body, wrap his arm around my shoulder and tried to support him to move. I felt a warm blood dripping into my back.

I whispered it over and over as i walk down the stairs. I can see the emergency exit light. As i step closer, I can smell the outside air, I can hear people running and shouting, and also an otherworldly roar. I put him down and open the emergency door.

What I saw was no salvation. The city i knew was gone. The buildings were in tragic condition with many spires pierces them. Road and cars were badly damaged, fires burns wild in many places, gunshots and explosions from a far was heard.

Several bipedal white-furred beasts, bigger than grizzly bear and more ferocious than tiger, chasing and preying on people. As i standing speechless, a white shadow leap over me, it was so powerful that it instantly crushes the car it landed into. It was another of those beasts, carrying its prey on it’s mouth, dead human pierced by it’s huge fang.

As it turned around, our eyes met. I saw a eyes of a hunter that sees me as an insignificant life, a mere prey. I trembled in fear as it drop its prey and howl toward me. I’m badly hurt, mentally shaken, and weaponless before the white beast. The beast we all know later as an Aragami, the Ogretail. 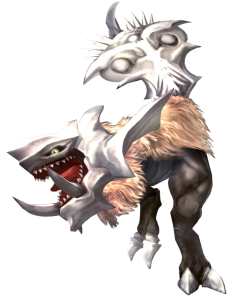